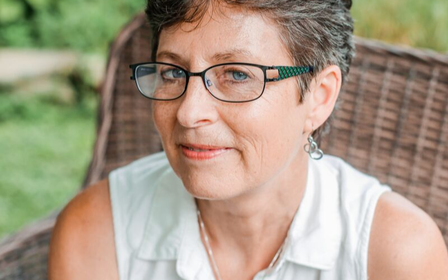 I believe I was destined to do what I do and it started with my birth.  And what is it that I do?

​I teach an entirely different paradigm of health and mindful body awareness.  I’ve been in the holistic and alternative medicine fields for over 35 years and all of that changed in 2009.

I was born in the late fifties and like most women of that decade, my mom expected to be anesthetized during birth.  The trouble began when I evidently wanted to be born at a particular moment and the doctor wasn’t available.

​The nurses prevented my birth while they waited for the doctor.  Long story short: I was angry.  My grandmother said I looked like a prize fighter ready for a fight when I was born. ​ 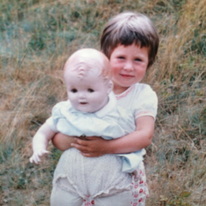 Fast forward about 7 years.  I was sick in bed with a bad sore throat.  The family doctor who lived down the street stopped by on his way to work and took a throat culture.

He asked me what I was allergic to and I replied “red candy” because I believed I had had a rash from the red dye.  Keep in mind this was the mid 1960’s –  the negative impact of chemicals and artificial colorings in the diet was not publicly recognized yet.
​
The good doc then prescribed some medicine on the off chance it was strep.  When I asked him about it, he winked and said it was like red candy.

My immediate thought?  "I don't know what's wrong with this guy's eye but he's an idiot," and my next thought was, “He obviously doesn’t know how to listen.”

Fortunately, I was a healthy kid and teen so other than the occasional summer camp physical, I didn’t need doctors or their medicine and that was just fine with me. ​

My first journey into holistic health

In my 20’s, I gave birth to my daughter on my waterbed at home with a midwife.  It was a wondrous event and one of the highlights of my life.

I raised her as naturally as I knew how with a whole food diet and herbs, homeopathy and TLC when she was sick.

She had some behavioral issues until she was 12 so I set forth to heal her gut and her behavioral issues vanished within a year.  By this time I was teaching cooking classes and the importance of healing one’s gut to be healthy.

In my mid 30’s, I learned energy work including transformational breath work, kinesthetic associative reprogramming, body mapping, sound therapy and more.  I began to see clients and also coached them in nutrition and gut health.

I became a vegan in my late 30's, believing this was the healthiest diet on the planet while working on my Masters degree from the University of Maine in Peace & Humane Studies.  My thesis was about compassion.

​Yes, I was finally making peace with the demons inside and, with my daughter now heading to college, I threw myself into learning holistic health, also believing this was the best information I could offer to people. ​

Raw Living Foods pizza at the Ann Wigmore Institute, Puerto Rico
I studied at many schools in N. America for over 10 years and learned many modalities such as herbalism, complex homeopathy, functional medicine, iridology, colon hydrotherapy, Whole Health Education, and more nutrition.

I worked for a naturopath in California for two years analyzing functional medicine lab results and developing healing programs for the doctors and practitioners that used her lab tests and homeopathic products.

I then took the plunge and opened my own wellness center in Auburn, ME in 2006 and it was a success from the first day.

​Over the course of 6 years, I helped 100’s of people regain their health.  Meanwhile, my own health was declining.  I was in my mid/late 40’s and the stress of working 60+ hours/week was taking its toll.

Heal Thyself
I also had chronic eczema on my lower legs and despite assisting other people for years with their health issues, I realized I still had some that I had not addressed, and I knew menopause was right around the corner.

I then healed myself of chronic eczema following a mostly raw, living foods diet, by cleaning my colon, using botanical formulas, and using traditional naturopathic treatments.  Not one of these alone did the trick: it was the synergy of all of them that was beneficial for my body.

My body went through a major shift during these few months.  My eczema appeared to clear off of my skin and I was ecstatic  but after several months on a raw, living foods diet, I was also weak and emaciated.  I felt like I was dying.

I had lost weight which I couldn’t afford to lose.  I had little energy and my nerves were frazzled.  Maintaining proper blood sugar was a daily challenge for me as a vegan and my hormones were depleted.  I felt my health slide downhill and knew intuitively I wouldn't survive unless I made some big changes.

​I knew I needed to rebuild my body, but how?

Yep, this really is pastured chicken fried in lard. WAPF Convention, 2013
I had previously studied the seminal work of Dr. Weston A. Price and decided it would be a grand experiment to give it a try so I switched from a raw, vegan, Living Foods diet to a Weston Price diet literally overnight.  I began to incorporate small amounts of high quality animal protein and fats into my diet and greatly reduced the carbohydrates from grains.

I began eating foods I hadn’t eaten in over 30 years.  It was scary at first – change often is and I didn’t know how my body would react.  I did not have to worry – my body knew what it needed better than my thoughts and beliefs did.

That is not to say it was totally easy…..it wasn’t.  I had a specific mindset (vegan) with some very hard core beliefs that involved my spirituality (spiritual people are “above” eating animals), health (animal products are destructive to human health), and my values and ethics (if I won’t kill it myself, I don’t deserve to eat it).

I had to face each one of these beliefs and replace them with a different mindset and I knew I needed to do this in order to be physically healthy.

I should add: I have never been content with the status quo or in continuing to believe something because it's what I've always believed.  This is evident from the two food pictures shown above.  Nor do I believe something is right for everyone because someone had a good experience with it.

I need proof; I need to know why and how it works in the body before I’m ever going to recommend it to others.  There needs to be an innate cohesiveness and mindfulness to all of my recommendations.

​So, at this point, I continued to search for answers in many different modalities.

The Biggest Epiphany of All 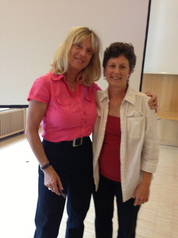 My teacher, Caroline Markolin, and I in Austria, 2013.
In 2009, everything changed.  You know when you have an intuitive nudge to pursue something?  These nudges kept coming to me: learn German New Medicine.  What the heck was that?  I had a successful wellness center; what more did I need?  Still, when the Divine speaks, you listen.  I signed up for the training and headed to Canada.

To say the knowledge of the Five Biological Laws of GNM is life-changing is a cliché and an understatement.  I realized that, while I was a holistic practitioner, I still existed within the allopathic model using herbs and food instead of drugs and surgery.

GNM changed all that.  It is a complete science discovered by a doctor 35 years ago who was diagnosed with cancer after his son’s death from accidental gunshot.

Dr. Hamer could literally look at a CT scan of your brain and tell you what organs have been affected and/or healed and what the emotional/biological cause (known as a conflict shock) was.

It takes the traditional mind/body connection to an entirely different level which is verifiable in brain scans and by embryologists.

GNM made a huge shift in my personal life and in my practice as well.  I started teaching it immediately at my center and clients had even greater success.

​While I still used nutrition, cleansing, detoxing, herbs, homeopathy, etc, I used them differently because of GNM and that has made all the difference.

Long story short: I sold my wellness center in 2012 and my husband and I moved to NC to be closer to our two beautiful grandchildren.  To all the grandparents reading this: I get it!  There is nothing like the love of a grandchild.

I continued to teach and consult with English speaking people all over the world with Skype and other technologies.  GNM has formed the basis of my work because it’s precise, accurate, and empowering to the client.

I joined an international team of GNM teachers in 2012 and decided in 2016 to take a break from it to cater to family matters.  My mother passed in June, 2016 so I spent the next year tending to myself and her estate.

​In March, 2017, after a phenomenal trip to the pyramids in Egypt and Petra, Jordan, I returned home and said, what now?  Since my passion is teaching, I devoted the rest of the year to developing an on-line and in-person course on German New Medicine.

My full-time job is teaching and I love it!  I also travel to conferences where I speak and give GNM workshops.

So, to that doctor who was late for my timeline of birthing into this world: I thank you.  I believe that initial anger fueled my passion for helping people outside the current medical system and set me on the the successful path I walk.
​
Won't you join me??? 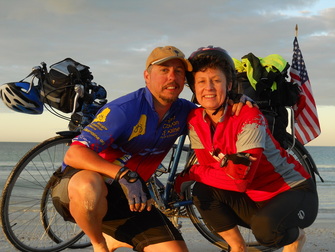