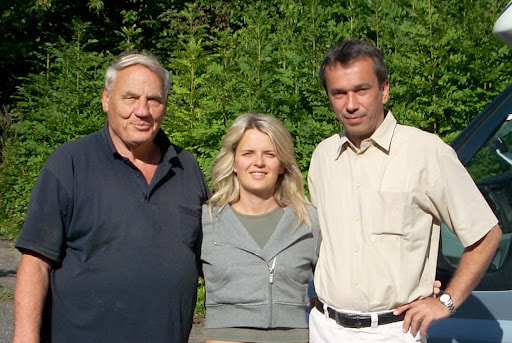 Remembering Helmut, the Guardian Angel
« One is well when the others are well. One is happy when the others are happy »
(Helmut Pilhar, Summer Solstice GHK Thing, 2022)
Dear friends of the Germanische Heilkunde®,
​
Today I will not talk about Germanische Heilkunde.
Today I will not talk about science, politics, medicine or music.
Today I am going to talk about a Human Being who has been a great friend of mine and a guardian angel for all of us, although not everyone is aware of that yet.
Many cannot even imagine the seriousness and diligence with which Helmut Pilhar watched over us all, fighting on the front lines for freedom and the natural rights of all human beings.

If many are not aware of this as a reality, it is because Helmut did not like to show off, but worked and worked and worked, to carry on and defend what he believed in. To honor the legacy that was left to him.

As I have said many times before, Helmut was a hero of our times, who played his role so discreetly that I have often said, "Gee, Helmut, the world must know who you are!"

But before the world could know all this, he discreetly left us, to rejoin his beloved Geerd in the heavens.

In fact, I cannot think of Geerd without thinking of Helmut.
I met both of them at a time when we were still able to tell jokes and laugh together, despite the heavy tasks we were and would be called upon to face.

Instinctively, I’ve always called Geerd “the Father of the GHK” and now I more precisely realize why: I saw him behaving like a father many times!

This is how Geerd behaved with Helmut. In the same way Helmut behaved like a son to him and like a brother to me.

So, yes, with Helmut, another big part of the “GHK family” has gone, but I still remember the love and respect that Geerd and Helmut felt for each other.

It is said, “One lives twice: the first time in actual reality, the second time in memory.”

And I remember that on more than one occasion when Geerd and I made plans, Geerd eventually said: “OK, I’m going to call Helmut!”

And after that ‘the machine would start up’.

This was the GHK family I have lived in for the most significant years of my life.

Perhaps not exactly ‘carefree’ years, because we felt that the sword of Damocles was hanging over us, a sword that would strike us very soon, turning our lives into the big mess they are now in...

But if I can somehow deal with such a mess now, it is because in those years I was able to experience firsthand what self-sacrifice was, what loyalty to an ideal was, what courage was, and, finally, what dying for an ideal was.

In particular, I benefited from the sense of protection that "the men of the house" - like a father, Geerd, and like an older brother, Helmut - knew how to give me.

I admired them so much!

I realize Helmut could have even seemed aloof to those who didn’t know him, to those who had never had a chance to test his loyalty, his strength and his thoughtfulness; But those who did, knew they could rely on him, despite his phases of f***k the world! :-D

So, Geerd counted so much on Helmut Pilhar.

Actually, Helmut was always there, like a Pillar: firm, sometimes even obstinate. Unshakable.

They weren't taking it easy at all, and today I can't help but thank them for being the ones who never indulged.

Helmut tirelessly poured courage, honesty, loyalty, strength – all of what he was capable of! – into the huge vessel of GHK.

I will never  get it out of my mind that when they finally succeeded in separating Geerd from Helmut, Geerd felt his main pillar was missing…

He must have felt his voice was being taken away and yet Helmut was able to bring “Dr. Hamer's voice” to where Geerd’s could not reach because Geerd had been  threatened with arrest.

Helmut was definitely an outstanding spokesman!

He actually loved to say only the essentials.

May you rest in peace on top of Yggdrasill, near the brothers who preceded you on your last trip. Near Geerd.

Now, finally, you will be free from those snaking traitors, the turncoats, the liars, who were willing to make your life a Hell yet instead have paved the way to Heaven for you. They gave you the opportunity to respond to them with Love, to show that you never knew what hatred was, nor revenge, and to teach them what living for and not against actually means.

And in the end, when you understood that your enemies left you no alternative to hatred, you preferred to leave, first to Paraguay, then to the Father’s House. Discreetly.

I’ll always keep you in my heart.

I still don't know how we’ll go on without you, but I can promise you that your sacrifice won’t be in vain.